On Friday 9 September, the Student Representative Council (SRC) was proud to again host the annual ‘Endeavour’s Got Talent’ show. Amidst the bustle of students trying to grab a front-row seat, the show was launched by last year’s champions – Sax in the City who wowed the crowd with their saxophone rendition of ‘Bad Romance’.

When our College Captain MCs took to the stage to officially open the show, the atmosphere was electric. Who would win the coveted title in 2017?

The first act to the stage was Eduard Kola, accompanied on the guitar by Jack Willsmore. His comedy act engaged the crowd and had the audience in stitches! He was followed by Lachlan Matters and Saba Hadera, who performed a mesmerising duet. Charlotte Knudsen then had the crowd enthralled with her haunting rendition of ‘True Colours’; she was followed by our 2015 winner, singer Shatha Jamal-Awar, accompanied on the piano by Marcia Jamal. The contrast was extreme as Jack Kretschmer then amazed the audience with a rock medley on his electric guitar. Finally, with the stage cleared, Lila Vassillo and Madison Clark had the audience on their feet with their incredible gymnastics, self-choreographed to music.

As the SRC tallied the scores, the crowd waited in anticipation. They had cheered, whooped and hollered for each and every act – and now there was only one thing left to do – announce the winner! Jack and his guitar came third, Marcia and Shatha came second, and, separated by just a single point was Lila and Madison who took out the title!

Catch a glimpse of each performance on our Facebook page.

We cannot wait to see what talent is unearthed in 2018! 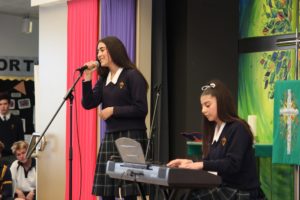 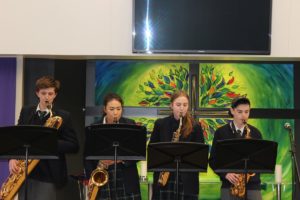