Our third original major production ‘Before Upon A Time’ ran from Wednesday 6 June to Friday 8 June, coinciding with the College’s 20th anniversary.

Featuring over 130 talented performers and supported by a 13-person dedicated technical crew, a 16-person make-up team and many other behind-the-scenes roles, the show was a culmination of many hours of work, and, of course, practice, practice, practice.

The Endeavour College community has outdone itself by getting behind and supporting this major and memorable production.

An article on the production featured in the Northern Weekly Messenger. To view a copy of the article, click here. 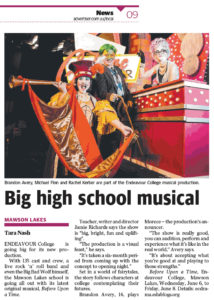 Tagged: Before Upon A Time, Drama, In the media, Major Production, music, Performing Arts