The Year 12 English Literary Studies students had the opportunity to see their novel study literally come to life in miniature on their recent excursion to the Dunstan Playhouse, where they were immersed in theatre company Hotel Modern’s production ‘The Great War’.

Combining reality and imagination, film and theatre, the brutal honesty of life on the Western Front became a visceral experience for the class. Here, performers arranged and animated miniature worlds created from sawdust, rusty nails, parsley and other household paraphernalia, whilst tiny cameras were projected on to a giant screen. The script was adapted from interviews with veterans and diaries and letters from soldiers who were exposed to the brutality, as well as mundanity, of life on the front line.

According to the Joint Artistic Director, Rachel Healy, “this unique form of theatre illustrates, in devastatingly heart-breaking form, the horror of combat and history’s most potent lessons.”

This excursion enabled a greater contextual understanding, and appreciation of the brutality of the war, which is a key tenet explored in the novel the students are currently studying. Their teacher, Mrs Davies, as well as Mr Thiele and Mr Slaven, accompanied the students on this powerful educational experience. 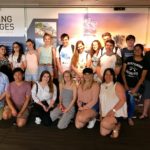 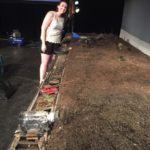